You may remmber when few years ago I have proposed HaT produce 1:72 Mexican Revolutionaries? "HaT Line drawings of Mexico Revolutionaries 1910-1930?"

This proposal had been received quite well, nearly 20 users declared buying such sets, many sets each.


Few years fast forward and recently Italieri give a hint they probably will produce well armed Zapatistas/Pancho Villa in sombreros (dismounted?):
https://www.facebook.com/ItaleriModelKit/posts/1209845639088054
since such set had won in their FB voting (also a tip for HaT about popularity!):
https://www.facebook.com/ItaleriModelKit/posts/1202283683177583

And such sets would sell by dozens, since peasant revolutionaries army are usually numerous.

So I started to reworking my old idea: 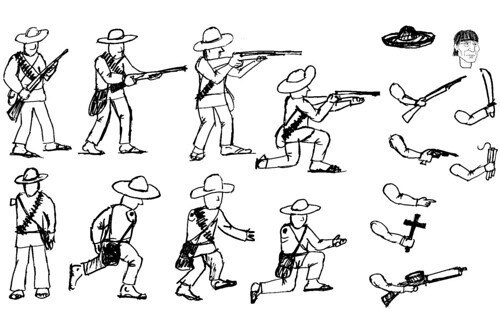 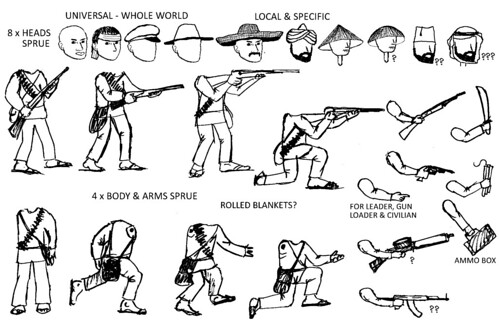 I think it would be better then previous set as much more universal. From 1900 till 1980. From Latin America, Wild West, Spanish Civil War, Africa De- & Colonisation, Middle East (Lawrence of Araby), Back Of Beyond, India, China Civil War (anti-warlordism included), Far East (Vietnam, Malaysia), pulp included.

All poses have to be evenly poor. No well-armed/well equipped. No officers or nobles, please, as it reduces multiposeablity.

"Without-one-arm" pose helps with convertability (f.ex. putting ponchos). It allows to create f.ex. whole squads of macheteros or dynamiteros without repeating poses. Remember You can slightly rotate the heads to add diversity!

First guy can be easily converted to flag bearer.

Of course the box could be twice as big as I've proposed: 8 body sprues and 16 heads sprue. (Still I would have to buy dozens of boxes.)

What do You think? Esp. regarding items with question mark? AK47 would work with those primitive "uniforms"??

Arab wouldnt work so well since You would have to convert coat... Not to difficult but still...

I would support it even through crowdfunding (but keep the prices low, pretty please).

Can't disagree with this. Bring it on.

Note some time ago, I had proposed a set of civilian-dressed Napoleonic militia figures of generic nationality, to fill a gap for civilian militia required to adequately represent such militia in Europe (Prussian, Austrian, Spanish) and in North America (Canadian and US for War of 1812).
There are somewhat useful figures existing in various sets but typically only a few figures per set. Strelets has a set of US militia figures but their typical Strelets style stands to be improved on significantly. HaT would be filling a noticeable gap here. These figures would probably be useful for pretty much all 19th C conflicts including US Civil War. Perhaps also useful as Boer commandos in a pinch. I imagine Spanish American War uses as well. It's almost endless!

Awesome!! I would commit to 20 boxes under a crowd-funding scenario.

This represents something fresh and new, and opens a world of wargaming possibilities.

In case anyone wonder if such set could work, here are examples of HaT master work:

So yes, its technically possible.


Oh, and it wouldn't be difficult to convert such militia with pikes, like some chinese warlords did.

This is a great concept which, as you say, HäT have already used in earlier sets so why not give it a try?

I know I could use two boxes of these for the Spanish Civil War, the Sino-Japanese War, and possibly WW1 Balkans troops.

I'd suggest to leave the assault rifle out.

i
ironsides
Re: Line drawings of XX-century Peasant Revolutionaries

Scrap the Lewis add a Madsen LMG and a Mondragon...add a Kepi for minor South American armies, personally I think it would be better to concentrate on South American and do a seperate East Asia set

u
Umpapa
Re: Line drawings of XX-century Peasant Revolutionaries - explanation
ironsides
Scrap the Lewis add a Madsen LMG and a Mondragon

First of all, I was thinking about Mauser rifle, since it was ubiquitous.

Secondly, I am definitely against scraping Lewis Gun. It is essential for this period.

I was considering Madsen. But Madsen users are less wargamingable:
https://en.wikipedia.org/wiki/Madsen_machine_gun#Users
Yes there is Paraguay. But these militia do not have leather equipment! So it rather wont work for Paraguayan army!

So after consideration IMO Lewis Gun is much better option on precious sprue space then Madsen, I am so sorry. Still, maybe placing Madsen instead of Ak47 would be worthy to consider.

Thirdly, we cannot hope for separate sets for every militia (Latin America, SCW, Middle East, Back Of Beyond, China). I doubt we would gather enough support. I am afraid HaT wouldnt risk producing such set.

I doubt if such no leather military equipment militia cold work for any army, including Latin America. Even Paraguay. How such "concentrated on South America" set could work for armies and revolutionaries of Mexico, Paraguay and Bolivia? That's impossible.

I think we could try in the future to gather support for different set - typical 1910-1950 warm climat army: putees, universal leather equipment and ammo pouches. With choice of headdress like: kepis, caps, straw hats, different helmets. For China Warlords, Federales, Iranians etc. It's doable. If You point me photos of armies you would like to unify (the more simillar armies of many diffrent countries the better chance such project succeeds), I will try to draw such set for You. But is not the set we are gathering support now.

So I am afraid I have to respectfully disagree with You.
Email
p
Paul Collins
Re: Line drawings of XX-century Peasant Revolutionaries

I would be in for maybe half a dozen boxes of these. I do agree that maybe the assault rifle is a waste considering the time period of the other weapons, but not a deal breaker. I can always use spare aks for convervsion purposes.

Email
a
alf
Re: Line drawings of XX-century Peasant Revolutionaries

It will be short - I want that miniatures! :)